Etymology 'KUALA'Kuala Namu International Airport is located in Deli Serdang, North Sumatra and had many new facilities, officially began operation on Thursday, July 25, 2013.Selection of the name of the airport was based on input from traditional leaders and community leaders Karo. Later the name was discussed and proposed by the provincial government and the parliament are subsequently determined by the Minister of Transportation. In English, the airport was named the Kuala Namu International Airport or abbreviated KNIA.Meaning of word 'Kuala Namu'The word 'Kuala' is derived from the Malay language which means the mouth of the river or a river meeting the sea. While the 'Namu' or 'Namo' comes from Karo meaning depths. Kuala Namo or Kuala Namu is a combination of two indigenous languages ​​Sumtim in accordance with the terms of the language of two indigenous ethnic population of the local area. So, Kuala Namu is the place to meet.

Malay have the coverage that many speakers and a wide area: the archipelago and the Malay Peninsula. In Indonesia the Malay language consists of several variants and dialects from Aceh, Palembang, Riau, Jambi, Deli, Minangkabau to Banjar Borneo. In other countries, the Malay language was used in Malaysia, Singapore, Brunei to the south of Thailand.The meaning of the word 'Kuala'Back to the laptop, KBBI IV in 2008, the word 'Kuala' means a confluence with the river or river to the sea; estuary; estuary together from multiple streams into one. In Indonesia, the use of the word 'Kuala' was not the least such Syiah Kuala University in Aceh, Port of Kuala Tungkal in Jambi, as well as language Banjar in Kalimantan, which consists of three large community that is Banjar Kuala, Banjar Pahuluan and Malay which has various dialects use as Barito Kuala.

Kualanamu International AirportKualanamu International Airport (IATA: KNO, ICAO: Wimm) is an airport located in Deli Serdang, North Sumatra Province. The airport is located 39 km from the city of Medan. The airport is the second largest airport in Indonesia after Soekarno-Hatta International Airport. The airport location was once a former plantation area of ​​PT Perkebunan Nusantara II Tanjung Morawa, located in District Beringin, Deli Serdang, North Sumatra. Airport construction is done to replace Polonia International Airport which is already 85 years old. Kualanamu expected to be the "Main Hub" which is the base for the international transit of Sumatra and the surrounding region. In addition, their policies for development Kualanamu International Airport is due to the presence of Polonia International Airport in Medan who have limitations Operations and difficult to be developed as well as the condition of the facilities available at Polonia Airport was no longer able to accommodate the needs of air service that tends to increase.History and Development Background Kualanamu International Airport:________________________________________1992: We studied the selection of an airport location New lieu Polonia Airport by DGCA, against 6 (six) alternative locations in the province of North Sumatra located in the region Kualanamu, Pantai Cermin & Silver Overlay (each of two locations) , Having regard to the six (6) the following aspects:a. Spatial plans;b. Economic growth;c. Economic feasibility, technical, operational, environmental and air transport business;d. Safety and security;e. The integration of intra and inter-modal; andf. Defense and security of the State;Selected 2 (two) alternate airport location New lieu Polonia Airport which is in the region Kualanamu and Pantai Cermin (each one location).1994: We studied the manufacture of Master Plan and Basic Design New Airport as a substitute for Polonia Airport by DGCA to two alternative sites that are in the area Kualanamu & Coast Mirror (each one location).1995: Establishment of New airport location in Kualanamu lieu Polonia Airport by Minister of Transportation Decree No. 41 of 1995 (21 September 1995) which is then refined with Transportation Minister Decree No. 66 of 1996 (6 November 1996).1996: Commencement of the process of land acquisition for the airport location New Kualanamu area of ​​1,365 hectares by PT. Angkasa Pura II (Persero) as SOE organizers of public airports.1997: Master Plan Review Study Guide & Basic Design amenities Airport Land Side New Kualanamu by PT. Angkasa Pura II (Persero).The launching of new service Kualanamu build the system "ruislag" (swap with Polonia Airport), at the moment there are investors interested in the consortium PT. Citra Lamtoro Gung Persada.Related to the economic crisis in the New Order era, the status of the construction of the New Airport Kualanamu "Suspended Execution" through Presidential Decree No. 39 of 1997 on 20 September 1997; Then there was a change in the status of the construction of the New Airport Kualanamu "To Forwarded Execution" through Presidential Decree No. 47 of 1997 on November 1, 1997;1998: Return change the airport development status of New Kualanamu "For Suspended Execution" through Presidential Decree No. 5 of 1998 on January 10, 1998;2002: Published Presidential Decree No. 15 of 2002 concerning Revocation of Presidential Decree No. 39 of 1997 with the Ministry instructed the concerned to conduct a feasibility assessment forwarding projects deferred implementation (including the airport development project New Kualanamu) on March 22, 2002;Furthermore, the Ministry of Transportation c / q DGCA carry out a review based on the level of demand, the availability of funds and the criteria / special characteristics of the project and declared the construction of the New Airport in Kualanamu eligible to continue to implement. And the approval of the President during the Reform Era, Minister of Transportation establishes new airport development Kualanamu can continue to implement the pattern of funding from BLN / LOAN, but government policy in the Era of Indonesia Bersatu approved funds from the state budget and Sharing with PT. Angkasa Pura II (Persero) as SOE organizers public airport.2003: Preparation of Detailed Engineering Design development Kualanamu by DGCA and PT. Angkasa Pura II (Persero).2006: The groundbreaking as an early commencement of construction of the New Airport Kualanamu by Vice President M. Yusuf Kalla.2007: Establishment of the New Airport Master Plan Kualanamu with the Regulation of the Minister of Transportation No. KM 30 of 2007 (July 16, 2007) and amendments to the Regulation of the Minister of Transportation No. : KM 61 of 2007 (29 November 2007). Determination KKOP (Region Safety Flight Operations) Bandar Baru Air Kualanamu by Minister of Transportation No. : KM 57 Year 2007 (2 November 2007).2008: Implementation of the New Airport Development Kualanamu to date and is expected to be completed on target airport operations that have been set by the government.2013: Perngoperasian Kualanamu International Airport on July 25, 2013.2014: On March 27, 2014 Kualanamu International Airport inaugurated by President Susilo Bambang Yudhoyono. 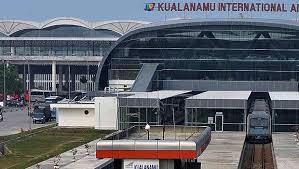